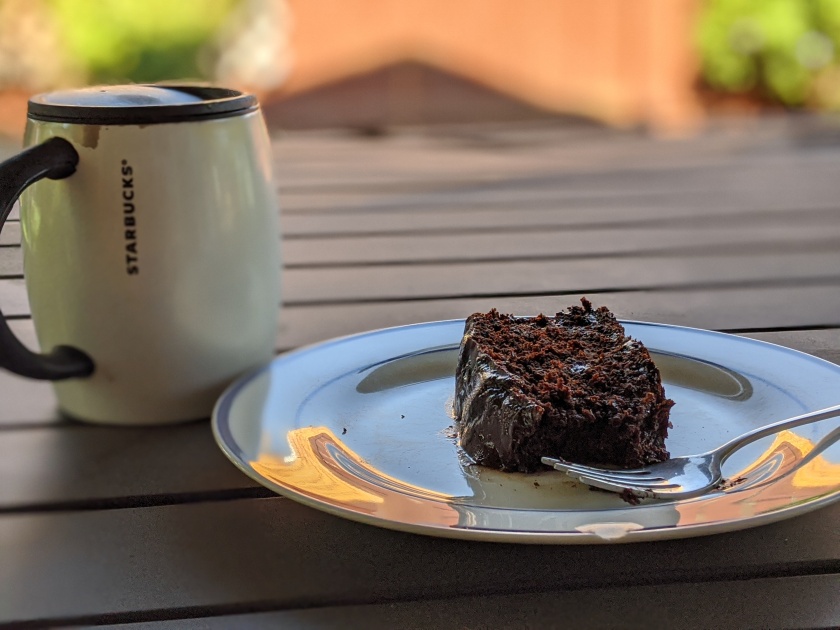 I went for a run this morning after ~3 weeks (? – I don’t dare check exactly how many, just that it was sometime in early August that I last hit the pavement), and oh, why do I ever stop doing this? Running gives me life and energy, and especially on sunny mornings, cool or hot, humid or not, running is a joy and a release. It wasn’t as challenging as I thought it would be, in fact, it was remarkable even and smooth, and I finished just a few seconds short of my usual pace at my peak. I’m 48 and I’ll forever be a back-of-the-packer, but that’s where I like to hang out, in the anonymity of the crowd.

We had breakfast on the back patio: a slice of this Triple Chocolate Zucchini Bread, which I made last week after an especially abundant haul from our garden, and my usual café au lait, with unsweetened soymilk. The dogs let us relax for almost an hour before they started growing restless and barking at the slightest noise from the street. I love Sunday mornings like this and am determined to keep this tradition for as long as the weather will let me.

Today I’ve no plans other than to read and write, mayyyyyybe attempt to set up this MyCloud external storage drive that I’ve had for over two years and remains unwrapped and neglected in its box. Oh! It’s not an activity I’ve relished diving into — clearly, given its tenure in my storage closet despite a cross-country move — but I’ve been wary about losing data ever since ~200 pages of my war novel was sucked into oblivion when my MacBook crashed irrevocably during a business trip to Glasgow 3 years ago. So I am determined to triple-back up everything.

Oh! And I just remembered that the Cobalt Betty teapot that I’d ordered last weekend is scheduled to arrive today! After reading Anne Barone’s glowing review of it sometime ago, I decided to take the plunge and buy it. The 4-cup version is relatively inexpensive at about $30, plus I added an strainer — I’ve had trouble in the past with truly stainless and rustproof infusers so I thought I’d try a strainer this time — which brought the total to about $44, including shipping and taxes. I’ve found myself drinking a lot more tea in the afternoon, using a hefty, thick mug that I love and which is part of my employer’s swag for our enterprise customers, but now I want to be more deliberate about the accessories that I use when engaging in my now-regular afternoon ritual.

When I lived in Japan many years ago, the “office lady” (that’s really what they were called, although in hindsight I should have asked what exactly was printed on their business cards or what they wrote under “occupation” on their tax forms, because surely “office lady” isn’t a real title?) would go around mid-morning with tall, slender glasses of cold mugi-cha in the summer, and hot cups of green tea mid-afternoon throughout the year. Sometimes there would be a small pastry to accompany the drink — always in the afternoon, never in the morning — but more often than not we would just have the tea.

During my first few weeks I found the tea bitter and just barely palatable, mostly because the only tea I’d ever drunk in my life before then was Lipton, and even then that was rare. Tea was something other people drank. I drank water and Coke. But as the weeks and months and years went on, the daily ritual of mid-morning and mid-afternoon tea breaks, plus the occasional tea ceremonies — formal and informal — I’d take part in turned me on to the whole idea of tea as an experience, not merely a hot beverage. By the end of my two-year tenure in Japan I had an entire shelf full of different teas — fruit teas, herbal teas, varieties of green and black, who knew there could be so many different teas? — and 8 years later I found myself visiting a tea plantation in Darjeeling, where I spent a week backpacking. I love reading about different tea — and often coffee — rituals around the world, from India to England, even the fika tradition in Sweden, which is about coffee but to which tea is most welcome as well.

So today my Cobalt Betty will come, and I will baptize it with a cup of loose leaf lavender tea and slice of homemade banana bread. The Sunday could not be more perfect.